In 2017, the Building Technology Division was made up of the Heating Technology, Air-Conditioning & Ventilation Technology, and Sanitary Equipment Business Unit. In the area of HVAC the division is a leading, highly integrated provider. Its main brands – Kermi, Arbonia, Sabiana and Prolux – sell their wide array of products across Europe.
As a genuine specialist for shower stalls and shower bases, the Sanitary Equipment Business Unit, including the brands Kermi, Koralle and Baduscho, can provide solutions for any requirement. With its unique range of models and variants, the business unit can offer the ideal solution for any space or circumstances.
Focusing on sustainability, cost efficiency and the highest standards of product quality, the division manufactures its products in cutting-edge facilities in Germany, the Czech Republic and Italy. On an international scale, the division has its own distribution companies in Switzerland, Poland, Russia, France, Austria and China.

As the annual report is a written reflection of the previous year, the structure in place for that period (the Building Technology Division being one whole division) will be used in this report.

During the reporting year, the Building Technology Division achieved a total revenue of CHF 555 million (previous year: CHF 486.8 million), which corresponds to a growth of 14%. In 2017, the acquisition of the Koralle Group was consolidated for the full year for the first time, whereas in the previous year this was only taken into account on a pro rata temporis basis. After adjustment for currency and acquisition effects, the revenue growth was therefore 4.1%. The divisionʼs financial year was marked by significant increases in raw material prices, particularly for steel, and an unfavourable exchange rate of the Czech koruna, which the division offset with price increases. The significant integration, optimisation and investment programmes to improve competitiveness were continued in all business units. The EBITDA increased from CHF 53.4 million to CHF 64.1 million, especially in relations to acquisitions. Without special effects, the EBITDA amounted to CHF 62.5 million (previous year CHF 57.9 million). The EBIT of CHF 44.5 million was also higher than in the previous year (CHF 35.2 million) due to acquisitions. Without special effects, the division had an EBIT of CHF 42.3 million (previous year CHF 39.7 million). All three business units again made a substantial contribution to the divisionʼs growth and profitability.

The recovery of the European construction industry – combined with a strong building sector in Germany and stable indicators in Switzerland – offers an encouraging environment. Nevertheless, the building sector in the divisionʼs key markets is primarily driven by new builds. Due to a lack of capacity among fitters, particularly in Germany, this is having a detrimental effect on modernisation work in many areas. As a result, the effect of the positive economic situation in many of the divisionʼs product segments is limited.

In Eastern Europe, on the other hand, the underlying conditions remain positive. In an effort to make better use of the potential in the Russian market, the Building Technology Division decided to increase its commitment with an own local radiator production.

The market environment in Western Europe varies from country to country. While the French market is stabilising, there is very little impulse for commercial investment in Italy. In light of the current debate over refrigerants, there is a trend towards water-based air-conditioning, which has a positive impact on the division. Despite a promising economic situation, the markets are still marked by pricing pressure.

Within the Heating Technology Business Unit, the reporting year was again characterised by investments for improving competitiveness and productivity. Production was successfully relocated from Switzerland to the Czech Republic. Furthermore, production processes in Střibro (CZ) were streamlined even further and efficiency could be increased thanks to a new soldering furnace and automated packaging system.

The modernisation investments launched at the Plattling (D) site in 2016 were completed on schedule. For instance, new presses, welding lines and robots were installed for the efficient production of steel panel radiators; a hall was built with an innovative storage system; and the packaging system for radiators was optimised.

With the brands Arbonia and Kermi, the Heating Technology Business Unit was able to present a number of new products and innovations. Kermi launched a new range of ventilation devices from the divisionʼs production network. These new devices meet the marketʼs demand for lower noise emissions and a more compact design. The range of heat pumps was complemented by the finalisation of development for two highly energy-efficient models. New design-oriented bathroom radiators, specialist solutions for temperature regulation, and steel panel radiators with a range of connection options complete the range of new products from Kermi.

Arbonia, a specialist in public and commercial construction, stepped up its range of products geared specifically towards the target groups of planners and architects. To achieve this, they introduced new underfloor convectors and radiant panels, and also increased its range of online services and software solutions.

Both brands appeared at a number of trade fairs, showcasing their new products and their strengths, which were validated by their awards for customer satisfaction and design.

With the presentation of Sabianaʼs new range of innovative air-conditioning units at ISH 2017, the division began tapping into the residential ventilation market, which is currently experiencing strong growth across Europe. As they are based on a modular design principle, the appliances are available in a number of variants and can therefore be easily adapted to the specific market and application requirements at any time. All devices, even the compact design offered on the Swiss market, have been awarded the highest energy efficiency rating A+. As they are able to achieve a standard never before seen in this market segment, several attractive major projects were commissioned not long after the devices made their trade fair debut.

The division also set a new benchmark with its new radiant panel, which is scheduled to go into production in the first quarter of 2018. The updates to the welding line and press shop needed for production were completed in 2017. The product series has undergone extensive revisions and is now characterised by energy efficiency and a low-weight design. Due to its advantages in the areas of functionality and assembly and its wide range of models, the series offers thermal comfort for any application within the industrial and commercial radiant panel segment.

A key issue in the reporting year was the integration of the Koralle Group into the Sanitary Equipment Business Unit. With the construction of new production halls, investment in the Plattling (D) site continued, as did workflow improvement, warehouse expansion, and optimised material movements. The Koralle Group increased its focus on the areas of research and development in order to update its product programme. The Group was also integrated into large parts of the divisionʼs SAP system. Through the continued expansion of the sales and service network, Bekon-Koralleʼs role as a Swiss market leader could be enhanced even further.

One of the highlights for the Sanitary Equipment Business Unit was ISH 2017. Introducing a new trade-fair presence, Kermi Shower Design presented ground-breaking new shower cubicles and shower areas. Also introducing a new trade-fair concept, Koralle presented a number of new products under the slogan “Something Special Everyday”. The new homepage was launched at the same time.

The principles of sustainability have been an integral part of the Building Technology Divisionʼs corporate philosophy for decades now, and are applied in the areas of development, production and staff relationships. By applying a management system certified under ISO 9001/14001/50001 (Quality/Environment/Energy), the division focuses on all processes, from development through to disposal. The advantages that energy efficiency offers to customers are at the heart of the new product development process. These new products meet the highest energy standards.

Sustainability is also a key focus in the area of energy consumption. For instance, the Italian company Sabiana produces over 75% of its annual power consumption itself. In Plattling (D), a state-of-the-art energy data logging system enables weaknesses in production to be analysed and inefficient energy consumers to be replaced effectively.

The obligation to determine suitable employee protection goals is a standard element of corporate policy. Each year, the company introduces prevention campaigns focusing on a range of different subjects, such as back health. Managers also receive training in the area of responsibility for occupational safety, as a means of giving safety-related issues more prominence.

The division assumes that the economic situation in its main markets will remain strong in 2018. However, limited fitter capacity will continue to dampen opportunities for growth. Trends in commodities prices also show no sign of letting up, which is why the outlook for 2018 only offers a limited amount of promise. Furthermore, the strained situation on the job markets continues to pose a challenge.

The division is tackling this tough environment by concentrating on its strengths and continuing to improve its competitiveness. It has invested a substantial sum of money over the past few years and will continue to do so in future. Following the relocation of production, the division will continue to drive forwards with process optimisation, improved efficiency and automation. The radiator factory in Russia is sched­uled to start production in 2019. 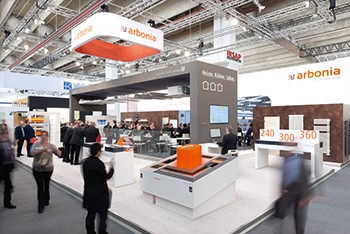 As usual, Arboniaʼs performance and product presentations were spot-on. The new radiant panel models were very well received by the audience of trade specialists. The new “Ascotherm® eco” underfloor convectors were showcased in a playful presentation. Interesting and thought-provoking discussions rounded off the successful appearance at ISH 2017 in Frankfurt (D). 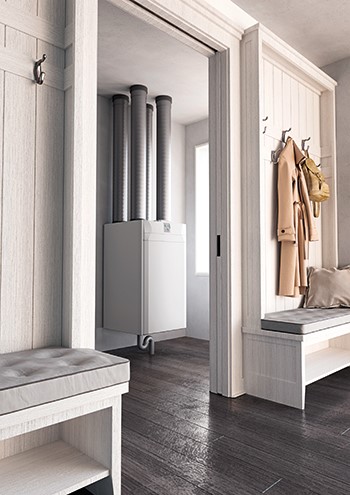 The presentation of the new “Energy Smart” ventilation system series in spring 2017 marked Sabianaʼs entry into a new market segment: air-conditioning and ventilation technology. While the product portfolio was primarily used in commercial buildings in the past, the new range of products are suitable for single- and multi-occupancy buildings and apartments. 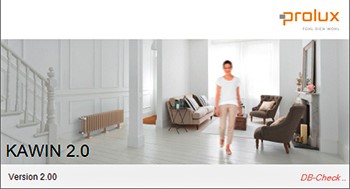 As an essential component of the digitalisation strategy, the introduction of the product design program “KAWIN 2.0” exceeded all expectations. Launched in September 2017, the software had already been downloaded countless times not long after its introduction. For planning experts and fitters, the program greatly facilitates the design and specification of heating, ventilation and air-conditioning systems. 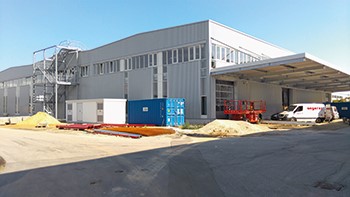 For the Sanitary Equipment Business Unit, the integration of the Koralle Group and the opportunities that this brought to develop a stronger market position in Switzerland, Germany and Austria was the most significant outcome of the year under review. Construction on the new production halls in Plattling (D) began in 2016 and is already making very good progress. Interior construction is almost complete and equipment could be moved into the hall on schedule. 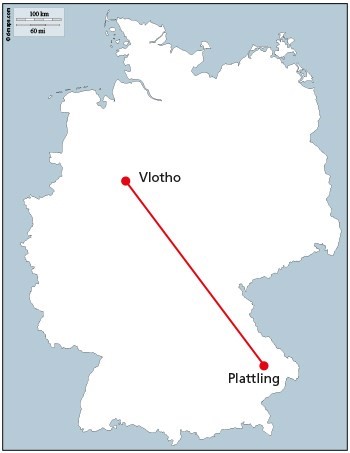 In 2017, production for Koralle (which joined the group in 2016) was relocated from Vlotho (D) to Plattling. Thanks to the overwhelming support from employees at both sites, production successfully got underway in the year under review. All Koralle product ranges have been produced and stored in Plattling since mid-September. More or less all ranges have also been shipped out from the site since October.