Consisting of the companies Prüm, Garant, Invado and RWD Schlatter, the Doors Division is one of Europe's leading providers of interior wooden doors and timber frames. The division has four production sites: two in Germany, one in Switzerland, and one in Poland. In total, more than 1'900 employees work at these four sites. In all three domestic markets (Switzerland, Germany and Poland) the Doors Division offers its customers a comprehensive range of products from standard doors to complex functional doors. 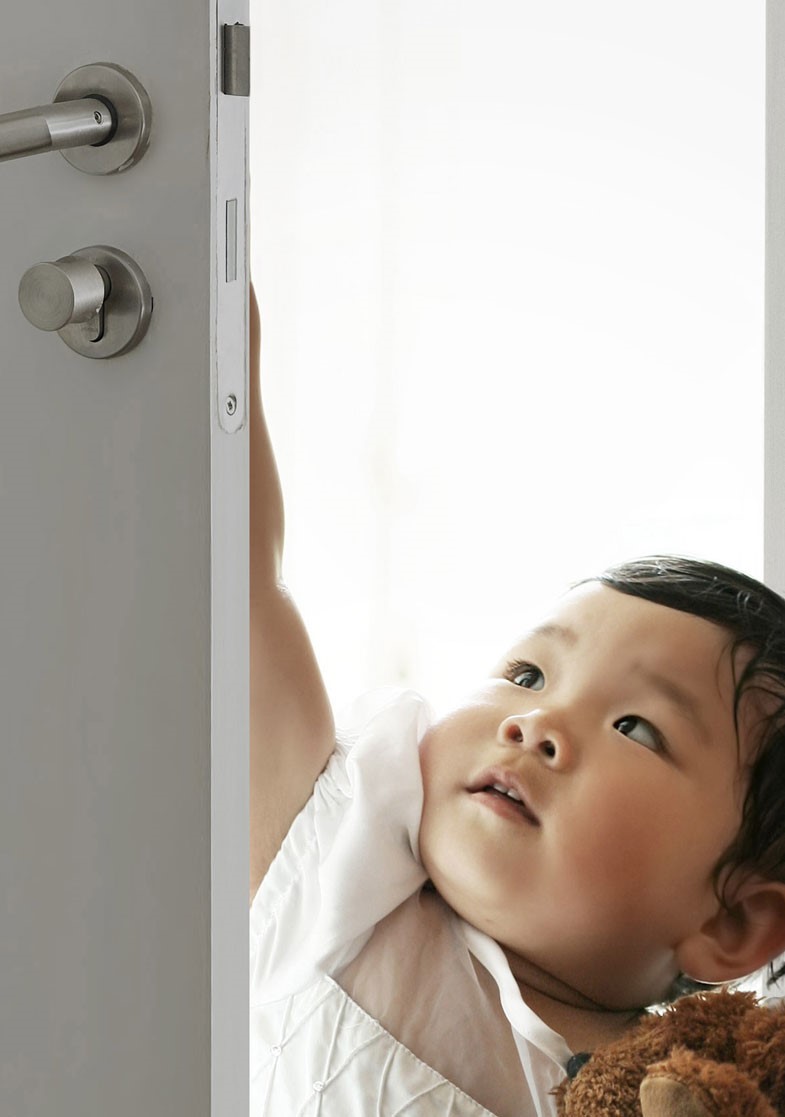 The year 2019 was also marked by a fundamentally promising market environment for the Doors Division. With approximately 60% share of total revenue, Germany is the division's most important market by far, followed by Switzerland and Poland.

In 2019, the two German door manufacturers of the Arbonia Group, Prüm and Garant, were able to record strong growth and expand their market share in Germany in terms of quantity to over 20%. The two German companies are primarily focused on the residential construction segment, which accounts for almost 75% of the market volume. In 2019, this segment was characterised by solid growth, driven by the housing shortage in large German cities and the fact that interest rates remain attractive. In addition to residential construction, Prüm and Garant also address the hotel market. In this new target segment, they were able to expand their market share, which was still small, in the reporting year.

The Swiss real estate market continued to perform well. The current financing environment remains attractive with record low mortgage interest rates. Public authorities are renovating hospitals, nursing homes and schools. At the same time, however, the doors business in the Swiss market remains highly competitive, and rising imports are further increasing the pressure on prices. In this market environment, RWD Schlatter was able to positively develop incoming orders, while focusing on large and complex properties. A lack of resources in the construction industry led to delays in very many large-scale projects currently being implemented, which will continue into 2020, thus slowing down the sales situation. In western Switzerland, RWD Schlatter withdrew from the direct contractor business and closed the Vevey site (CH). The French-speaking market is now being developed via the specialist trade.

The Polish residential market continued to benefit from the strong economic growth in the country. The number of apartments completed in 2019 increased by 3.5% compared to the previous year. This growth was driven by good labour market conditions with rising wages and falling unemployment. This positive trend is expected to continue in 2020 even though economic growth is anticipated to decline somewhat. Polish residential construction developed dynamically as a consequence of further increasing urbanisation and the general demand for housing. The stable economy encourages investments and, thanks to low interest rates, the cost of financing investments is low. This generally positive environment also enabled Invado to significantly increase its revenue compared to the previous year. This rather export-oriented company is represented in Poland with a market share of <5%.

In the Czech Republic, the demand for residential space in larger cities remains intact and is driving prices. An important growth driver here was the increasing demand for high-quality residential space. In principle, it can be assumed that the completion of apartments and houses will stagnate at the current level in the coming years. With Invado and Prüm, the division is the fourth largest provider in the Czech door market.

In Slovakia, the volume of building construction grew only slightly in 2019. Especially uncertainties in the automotive sector had a negative impact on the local residential construction segment as well. Invado is one of the three largest door suppliers in the local Slovakian market.

In anticipation of the leading international trade fair BAU in January 2019, the Doors Division launched a whole host of new products on the market. The highlights include the new premium edge, which protects doors and frames from heavy wear and tear with its high impact and shock resistance, as well as the “SmartDOORS”, which were developed in cooperation with the Berlin-based property technology company KIWI.KI. “SmartDOORS” enable residential property management companies to manage access to all types of widely distributed doors via a cloud solution, thus drastically simplifying key management. An important new development from RWD Schlatter is the new apartment entrance door “FORAS S-68”, which can also be used as a pergola entrance door. With its excellent technical properties, especially in terms of sound insulation, this door clearly stands out from the competition – even Europe-wide.

In addition to product innovations, the Doors Division is implementing a multi-year investment programme to increase productivity and improve delivery performance.

Similar to the requirements of the German market, the ability and flexibility to meet customer wishes and thus increase competitiveness and capacity will continue to be the focus in Poland as well. In 2019, Invado made pioneering investments for this at its site in Ciasna (PL), on the one hand in a new edging system installed in a new production hall and on the other in a new frame production line. These two key investments are not only important for increasing efficiency and capacity but also enable a significant increase in the quality of the product portfolio and thus a better coverage of the growing demands of consumers in Poland, the Czech Republic and Slovakia.

In order to maintain competitiveness, RWD Schlatter launched an investment programme of CHF 8 million this year. In July, a ground-breaking ceremony took place at the Roggwil (CH) site for the extension of the production hall by an additional 1000 m2. The extension creates space for a new, innovative and highly flexible paint shop and for an additional modern door processing centre, which will be commissioned in 2020. These investments will enable RWD Schlatter to serve its customers more flexibly in terms of schedules and product variety.

In addition to the investment programmes, the division also focused on the topic of digitisation this year. For this purpose, it has drawn up a digitisation roadmap along which it will substantially renew the existing IT landscape over the next few years, including the introduction of SAP S4/Hana. The division also worked intensively together with ARBONIA DIGITAL on the development of new software in the reporting year. The software is intended to enable the dealers of Prüm and Garant to configure, calculate and order doors
more quickly and also simplify internal work steps.

Sustainability in all its three dimensions is a key issue for the Doors Division. Firstly, there is the economic dimension, which particularly concerns the future viability of our business model and was explained in detail in the previous section. Secondly, there is the social dimension, which relates in particular to the issues of occupational safety and the training of the employees and is therefore a focus of the divisional management in this form. And thirdly, there is the ecological dimension. An example of this is the investment in a new incineration plant, which will lead to a significant reduction in emissions at Invado in Poland starting in 2020. Furthermore, the Doors Division selected the Ciasna (PL) site for an extensive project to optimise the required packaging materials, which will enable a first step towards reducing or eliminating packaging made of film and polystyrene.

The four companies of the Doors Division expect to see a continued positive if slightly more cautious economic climate in their domestic markets in 2020 due to the general economic uncertainty in the European core markets. For 2020 and 2021, market studies assume that the already high market volume in Germany will still increase slightly, remain flat in Switzerland and continue to grow significantly in Poland, the Czech Republic and Slovakia. The limited numbers of tradespeople in the construction industry are still curbing the potential for growth though.

The division is tackling this tough environment by continuing to improve its competitiveness. In addition to investments in state-of-the-art production capacities to increase efficiency and optimise processes, the topic of digitisation is also being advanced at a great pace. 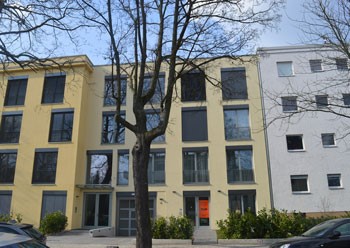 By the end of 2019, 10'000 properties with approx. 100'000–120'000 apartments were already equipped with the digital KIWI access system, which offers users convenience and maximum security. Digital access points are significantly more secure than conventional keys, since they can be locked remotely.

Doors from RWD Schlatter for the Bürgenstock Hotel

The Bürgenstock Hotel & Alpine Spa offers modern architecture and contemporary design with a unique view over Lake Lucerne (CH). For the hotel in the woods, the choice was made for the high-quality doors from RWD Schlatter (fire-protection elements for the public area and veneered elements with skylights for the Healthy Living Spa).
(Photo: Buergenstock Hotels AG) 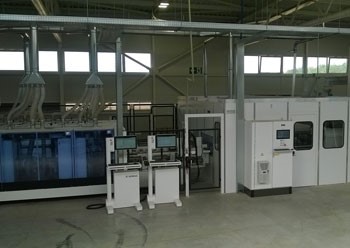 The new edge processing technology allows the division to respond specifically to the constantly changing needs
of its markets: The premium edge from Prüm and Garant for the German, Austrian and Swiss markets and the soft-forming edge from Invado for the markets in Poland, the Czech Republic and Slovakia.